Post Personalism Manifesto
The Post Personal Project can be summed up in artist Morris Graves’ statement: "My first interest is in being, along the way I am an artist."

Likewise, The Post Personal Project's first interest is in being, and that reality is the platform that enables Post Personal art. What is Being? It is the essential life that we are beyond and deeper than our mental conditioning including the narrative of ourselves.

"ism" indicates a system of thought.

Therefore Post Personalism is a system of thought that looks at the human state beyond self-centricity. It explores that space artistically.

For art to continue evolving toward a deeper, or higher state of human consciousness it must move in the direction of universal oneness. It is true that art today may continue evolving technologically and in style and technique, but those forms of evolution alone will not take us deeper into our shared oneness.

Post Personalism is now a critical imperative. Anything other than universal oneness is now part of the old reality, the old consciousness. Post Personalism creates art forms that address this theme directly.

Post Personalism is an artistic platform that enables an exploration of the evolution of human consciousness through art.

Post Personalism is not impersonal because it is compassionate. It is the next step. Post personalism is about the here and now, it is pro presence.

Post Personalism does not promote any doctrine or belief system. Instead, it is based on an open and flexible framework of oneness and seeks to go deeper than the status-quo state of human consciousness today.

Post Personalism was founded by Patrick Howe and Christopher Gasper, in Seattle, Washington, in 2014.
Post Personal Ideas Found in Culture and History 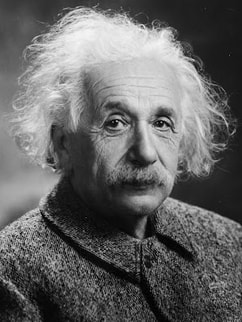 Albert Einstein
Einstein said "The true value of a human being can be found in the degree to which he or she has attained liberation from the self."  Therefore, the post personalist artist asks how does an artist become liberated in order to become of truer artistic value?

The Evolutionary Order
Post Personalism embodies the notion that an artist is not an isolated entity separated from the environment, others, or him or herself. It holds the notion that artistic creativity is aligned with—one with, the same creativity that has created all forms of life. The post personalist artist aspires to participate in that higher evolutionary order. 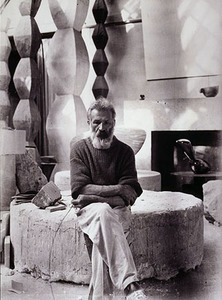 Constantin Brancusi, sculptor (1876-1957)
Historical Roots of Post Personalism
Many artist throughout history have had a perspective similar to the post personalist. And though they were not advocates of post personalism by name they nevertheless embodied some of the principles of post personalism. This is evidenced by some of the artwork and statements they made. These artists include Morris Graves, John Cage, Isamu Naguchi, Constantine Brancusi, George Inness, and many others. (Visit Wall of Words to see what some of them have said).

​Post Personalism attempts to bring together their like-minded philosophies even though they lived in different times, cultures and created diverse forms of art. The timeless philosophical thread they shared was a sense that they were a part of something larger than themselves; they were part of a universal order that in some way was expressed through them and their artwork.

Making an Apple Pie
Astrophysicist Carl Sagan expressed it this way "If you wish to make an apple pie from scratch, you must first make a universe. Suggesting that the apparent intelligence of the universe expresses itself even in the making of an apple pie. The word "apple pie" could easily be replaced with the word "art".

Transcending the Human Condition
While the styles of these great artists are wonderful, it is the universality of their artistic philosophies that has appeal to the post personalist. That universality was frequently expresses through their artwork. Furthermore, each artist aspired to transcend the conventional human conditioning of their day and to communicate that effort through their art. However, the post personalist does not wish to emulate or copy the styles of artists of the past, but to further their perennial universal philosophical aspirations in the present.

Painting by Surrealist Renee Margaret (1898-1967)
Comparing Surrealism to Post Personalism
Post Personalism shares no direct comparison to Surrealism however a sideways comparison can offer an insight into understanding the post personalist approach. Surrealism was inspired by developments in human psychology in the 1920's. The Surrealists communicated in their art what they believed to be the appearance of the human subconscious. They made works that resembled the illogical distortions of the dream state.

Post Personalism Explores a Content, not a Style
While both Surrealism and post personal ideas bring artistic attention to different aspects of human consciousness, the Surrealists had a clearly identifiable style. They had dripping clocks and so forth. The post personalist however is not necessarily style oriented. It is only content oriented, which means there may never be a uniquely post personal style because any artist could potentially express post personal concepts through whatever style was suitable.

The Post Personal Project
In the Post Personal Project exhibitions, Patrick Howe uses the lens of post personalism through which to focus on the issues of human identity, such as self-centricity, which he believes lies at the root of all social, political and individual problems.
Post Personal Roots in History
The chart below illustrate the stages of personal liberation throughout history. It is a broad generalization and there are exceptions to the rule. Nevertheless, the chart illustrates in broad strokes the evolution of the post personal perspective when applied to history: 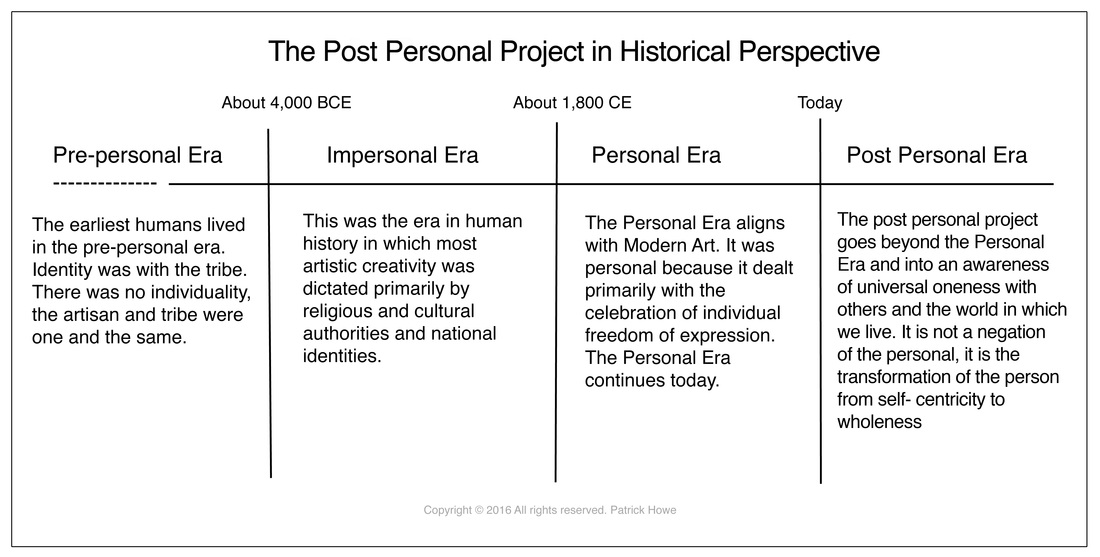