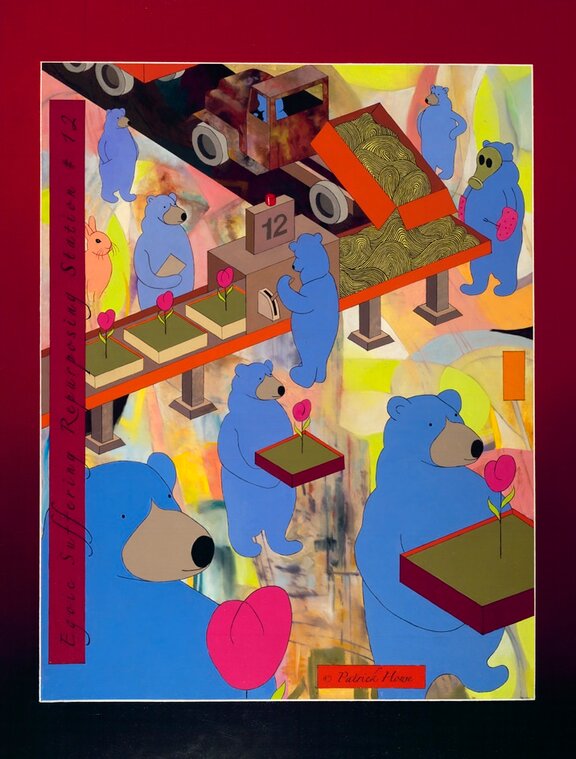 “Egoic Suffering Repurposing Station #12”
36" x 47" (92 x 122),
​Oil on wood panel.
​
The red border and isometric geometry of “Egoic Suffering Repurposing Station Number 12” in the painting reference the composition of Japanese ukiyo-e wood block prints of the 19th century. In this painting we see lavender bears working on an assembly line where they are transforming truck loads of a gooey, toxic substance into flowers. And in the foreground, bears are marching forward into the world holding the flowers with great dignity. I originally wanted to use people in this painting. But I did not want the figures to convey any specific race, gender identity, or emotional expression that would cause the viewer to focus on the individual human narrative. The use of animals, bears in this case, enabled me to convey the larger universal message of the piece in a way that can be enjoyed on multiple levels. 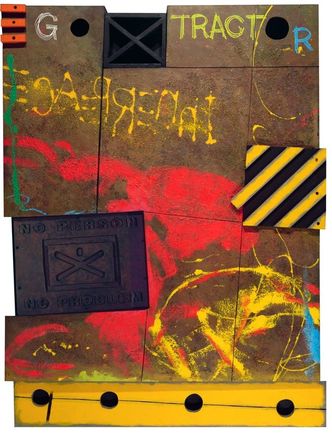 "Ego Extractor 9000"
36" x 48" (92 X 123 cm)
Oil on constructed wood
​
The words “Ego Extractor 9000” can be seen in the work. This is one of the first post personalism pieces that I created. I wanted to see if the concept of transcending self-centricity could be translated into an abstract construction concept. It has been my belief that the principles of post personalism can be applied to almost any kind of artistic expression.

In the lower left corner is a recessed area in which a graphical element conveys the words “No Person - No Problem”. This comes from the Eastern philosophical idea that an enlarged persona is always an obstacle in the way of the flow of life. A persona is the artifice that we present to the world. However, if a persona is all that a person knows of themselves, then suffering will inevitably follow because of the absence of a deeper authenticity. 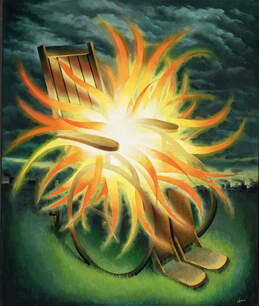 Here we see an antique wheelchair sitting within a rather gloomy environment. A city bellows black smoke in the distant horizon. Ominous clouds lurk above. However, in the wheelchair is a glowing orb or a radiant sun. In this painting I was working with the idea that even within humanity's limitations there is the possibility of a radiant potentiality. This idea came to me one evening when leaving an art gallery with a friend and seeing homeless people on the street outside. I thought, Post Personalism needs to show the radiant light that is within everyone, just as it is within these people. 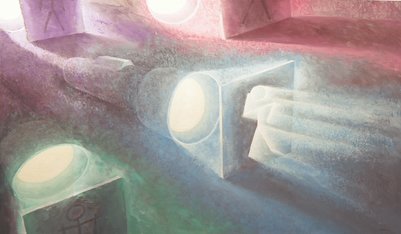 In this painting I creates a narrative that depicts the distinction between opacity and transparency. The work is composed of a field of flashlights and before each flashlight is a panel upon which is drawn a stick figure, held within the gauzy light of the painting. All of the stick figures are opaque except for the one in the center of the picture. This panel is transparent and the light from the flashlight shines through. The symbolism of light, which is a classical symbol of awakening and enlightenment, suggests the multidimensional nature of the human and is a theme that repeats throughout my work. For example, You can see references to light in “Shine”, and “Super Post Personal Person”.
"Running, Running, Being In This Dimension”(In response to Morris Graves' piece "Walking, Walking, Singing in The Next Dimension")
42" x 14" (107 x 36 cm)
Oil on wood panels

​
This work was inspired by Morris Graves’ magnificent piece “Walking, Walking, Singing in the Next Dimension”. In Graves' piece we may presume that the first two birds represent walking, while the third bird is looking upward in a shaft of light toward the next dimension. My interpretation is that Graves’ third bird is looking upward to the possibility of a higher state of consciousness. So I took that same idea but applied it to this dimension instead of a future “next” dimension. And instead of birds I used three dachshunds. The first two are running and the third is sitting in stillness. I am saying that the next dimension that Graves pointed to is no longer somewhere else, it is here and now.
​
It was never my intention to emulate Morris Graves’ extraordinary soft but powerful painting style. Instead, I painted three wood panels gold and attached them together. Gold is a color that symbolizes wisdom, joy, and light. 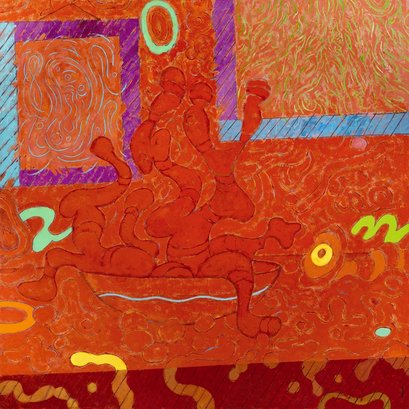 "Still Life with Ego-Eating Bacteria"
48" x 48" (122 x 122 cm)
Oil on wood panel
​
The idea for “Still Life with Ego-Eating Bacteria” came to me when I saw images of someone infected with necrotizing fasciitis, which is a gruesome flesh eating bacteria. I wondered, what if there were a bacteria that when it infected people instead of becoming sick they became more loving, kind and compassionate? It would eat away their ego. However, rather than portraying the concept of bacteria in a clinical manner, as is done in biological illustration, I chose instead to use whimsical forms overlaid by a color filed composition. The piece also shows a hint 19th century Post Impressionists painters Pierre Bonnard and Edouard Vuillard in the way they flatten the spatial depth of an interior scene and used bright colors. In order to enhance the painterly effect, I added Cold Waxed Medium into the paint, which is a combination of beeswax and Galkyd, to create its thick textural quality. 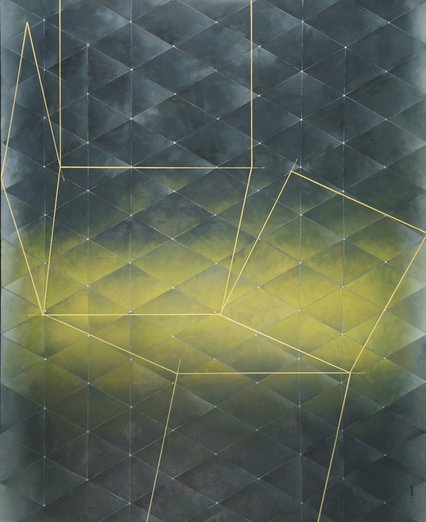 "Thinking Outside the Self"
36" x 48" (92 x 122 cm)
​Oil on wood panel
​
Many of my paintings convey a lighthearted and even a whimsical tone. However, in this piece I applied my interest in geometric design in the austerity of straight lines and hard angles. In this painting you will see the yellow outline of a box that has been opened. Behind the yellow lines is a geometric pattern, which for me conveys an ever-present background of harmony and balance. There is the saying "Thinking outside the box”, which was originally used by motivational speakers in the 1970s to inspire workshop attendees to think in unconventional ways. However, I am using that old cliche in a new way. I am saying that obsession with self-identity is the new box that we need to evolve out of. And from outside the limitations of that box, thinking in new and original ways becomes possible. 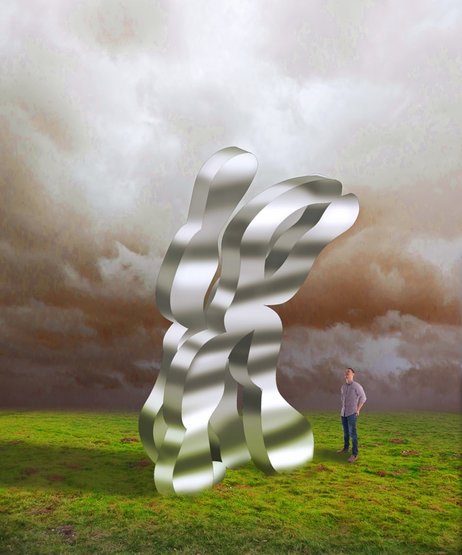 "Cosmic Chromosomes"
18" X 21" (46 X 53 cm)
Digital Media
​
Imagine for a moment that the universe were a single, magnificent sentient being, and it had chromosomes. Each chromosome would carry the source code for the entire universe. Stars are like cosmic chromosomes because they enable the existence of most forms of life. It is a scientific fact that the human form is made of stardust. I find that fascinating. Also check out my “Cosmic Chromosome” video. 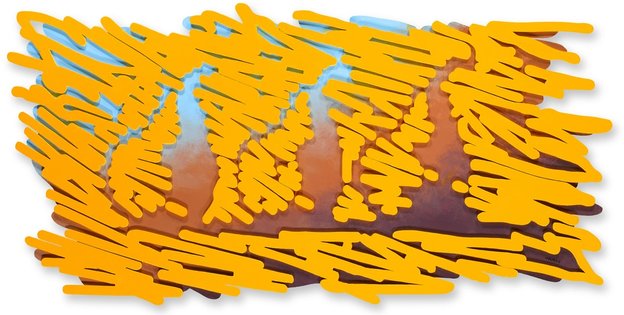 "No Identity, Just Watching Sunlight Becoming Pears"
24" X 48" (61 X 122 cm)
Painted wood construction
​
The yellow portion represents sunlight falling on pears. The lines are rays of the sun. The form of the pears are made visible only by the sunlight. If the pears are not easily visible to you, try standing farther back from the work and squinting. The unusual title of this work suggests that when we truly look deeply at nature our sense of identity dissolves for those moments and what remains is just the looking.
To artwork Videos